Owned by: The Government of India

Design brief: “The circular form of the emblem suggests unity, completeness, the fullness of man’s being and his growing consciousness and continual expansion (of the bank); like concentric rings in water, to cover the entire country; the small circle in the centre connotes that despite the bank’s size, it is the small man who holds the centre of State Bank stage.

Viewed from another angle, the small circle with the vertical line suggests a keyhole — the symbol of safety, security and strength. Through the keyhole, one could glimpse the future, with its promise of progress, of growth and fulfilment in business and life.”

The standard color of the emblem is “coats fast blue.”

Logo release: 01 October 1971, on the day of inauguration of SBI Central Office building at Backbay Reclamation.

The first Emblem of the State Bank of India adopted in 1955 is showing a banyan tree. The banyan tree has strong roots and its branches are capable of propagating and growing because of its aerial roots.

This is the second time I’m failing to see the ‘inner meaning’ of a bank’s logo. To me, South Indian Bank logo represents a seashell. But the bank says it represents coconut fronds. To this day, SBI logo was a keyhole to me. But the actual concept reveals the image of a common man as the SBI logo. Well, so be it.

Another interesting interpretation (other than the common man, ripple and keyhole) is that the white circle denotes a State Bank of India Branch, which will be found anywhere you go, even in the narrow lanes of towns and cities. In other words, the State Bank will be there to serve you, wherever you go.

SBI logo is very simple, uses only the basic shapes and is widely regarded as a classic logo. The following images are of a Coffee Table Book designed by Orange Stone.

This book also suggests common man as the centre of SBI logo.

“Kankaria Lake has got nothing to do with it!”

Debunking the story on SBI logo’s inspiration, Scroll.in has published an interview with Shekhar Kamat which includes many other interesting facts as well.

Bank tokens (round metal discs showing numbers with a hole on the middle) is mentioned as one of the inspirations. This video also shows his first version where the line in the middle of the logo is narrower.

Other product offerings from SBI also use this logo in interesting ways.

This interesting logo of a winner appears on State Bank of India Sydney Branch website.

Following are some of the logos featuring a similar keyhole concept.

Edeneo logo designed by Sacha Greif.
Edeneo lets you upload sensitive information to be made available after your death. The tagline is “the guardian of your legacy”. No wonder, the logo has an angel depicted.

DataInsure logo by Peter Radich.
DataInsure specializes in online data backup and insurance. The ‘D’ and ‘i’ of the name are cleverly tweaked to represent a lock with a keyhole. 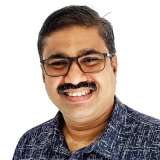 4 replies on “State Bank of India”

Someone told me that the South Indian Bank symbol tells how the bank is trying to extract money from the customer.. (Picture someone trying to dry a cloth with hand 😉

I don’t think that it was designed to convey anything other than a keyhole. I happen to know the person who was involved in its design.

Its like a famous artwork, people try to interpret it going as deep as they can to appreciate it.

The design brief I shared here is the official version. In the brief, keyhole takes a backseat.

I totally agree on the personal interpretation. Announcing the new logo in 1971, Shri R K Talwar, the legendary Chairman of SBI, wrote in the in-house magazine:

“More important is what people think of instinctively when they see it… The symbol will be what we make of it. What they think of us all, is what they will think of the symbol. And that is the meaning the symbol will ultimately acquire.”